"Affairs of The Heart” by Borislava Borissova (Historical Romance) 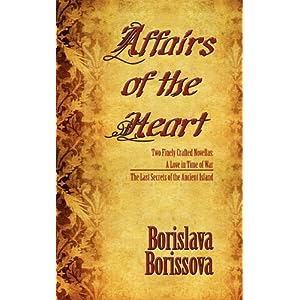 Summary:  Two love-stories, two affairs of the hearts in a book. In "A Love In Time of War" first they faced the war... the love followed later. Peace was somewhere in between. One day he could have killed her on the other side of the front, on the next day he fell in love and what would happen in the day after it? All efforts to remain enemies appeared to be in vain. The borderline between their ability to hate or to love appeared a thin one.

The war became past, the past became history and through the years only love is still alive in a very beautiful tale to remember.

In "The Last Secrets of The Ancient Island" series of mishaps in an old town casts suspicion on a number of residents, provoking changes in an adopted practice of the underground world of relics. Ralph, a young graduate of a university proves the last mysteries of ancient National Park sites are yet unexplored by historians and archaeologists and discovers the personal secret of his older brother Michael. An unknown driver has a tragic motivation to take his life and that of another.
We were born alone, we die alone, but life is our chance to live in love. If we donвЂ™t lose the chance, if know why love is the most desired legend in our life.

From “The Last Secrets of The Ancient Island”:

“I wanted to see the face, to look into the eyes of the dangerous driver who scared us with his crazy driving, caused a series of collisions and accidents on our streets and placing the life of each of us in danger and uncertainty. I still remember the squeal of the high-speed tires and the sense of an evil menace and I wanted to rage at him, to strike him. I expected…” Michael sighed sadly and, forgetting everything and everyone around him, he lapsed into the memory of that time.

“In the hospital, I ran up the stairs and I looked in the room to peer over medic’s shoulder. There were a multitude of tubes and wires. The intravenous system and respirator were attached to the body in the bed, to keep the driver alive. I saw the ashen skin, dark rings around the eyes, fragile hands—they were already powerless to hold the wheel. The body was worn, similar to a shadow. It was a young woman who wanted to die, who searched for death on the road as fast as the car would go. And to take another life with hers so she wouldn’t be alone when she drew her last breath.”

After a while, the older white-haired man repeated in amazement, “Let’s clear this up. You fought to the death in the Balkan War against her father, her brother and her country. And she served as a nurse to Bulgarian soldiers, among blood, wounded, dead, and the smell of formaldehyde on the opposite side of the borderline. Does it mean you are coming to ask for the hand of your enemy’s daughter? The Bulgarian general, who personally led his army from the front line against the Ottoman divisions?”

“Yes. First there was the war… the love followed later. Peace was somewhere in between.”

“Yesterday, you could have killed her on the other side of the front, today you are in love and what about tomorrow?”

“She feels the same way. All our efforts to remain enemies appeared to be in vain. The border line between our ability to hate or to love appears a thin one.”

His fellow traveler shook his head distrustfully. “Your story sounds crazy. Most probably, her father will not allow her to marry you. Hmm… Kidnap her instead. Escape together as others have done many times on the Balkans.”

“Who would easily marry a Muslim man and a Christian woman in secret? If not, what would she be in my life without a legal marriage? A mistress? The woman who was born to be my wife? I cannot make a political scandal between our countries. The general is respectful and popular.”

Buy this book on Amazon as an ebook or in paperback.  Also check out this author's blog.